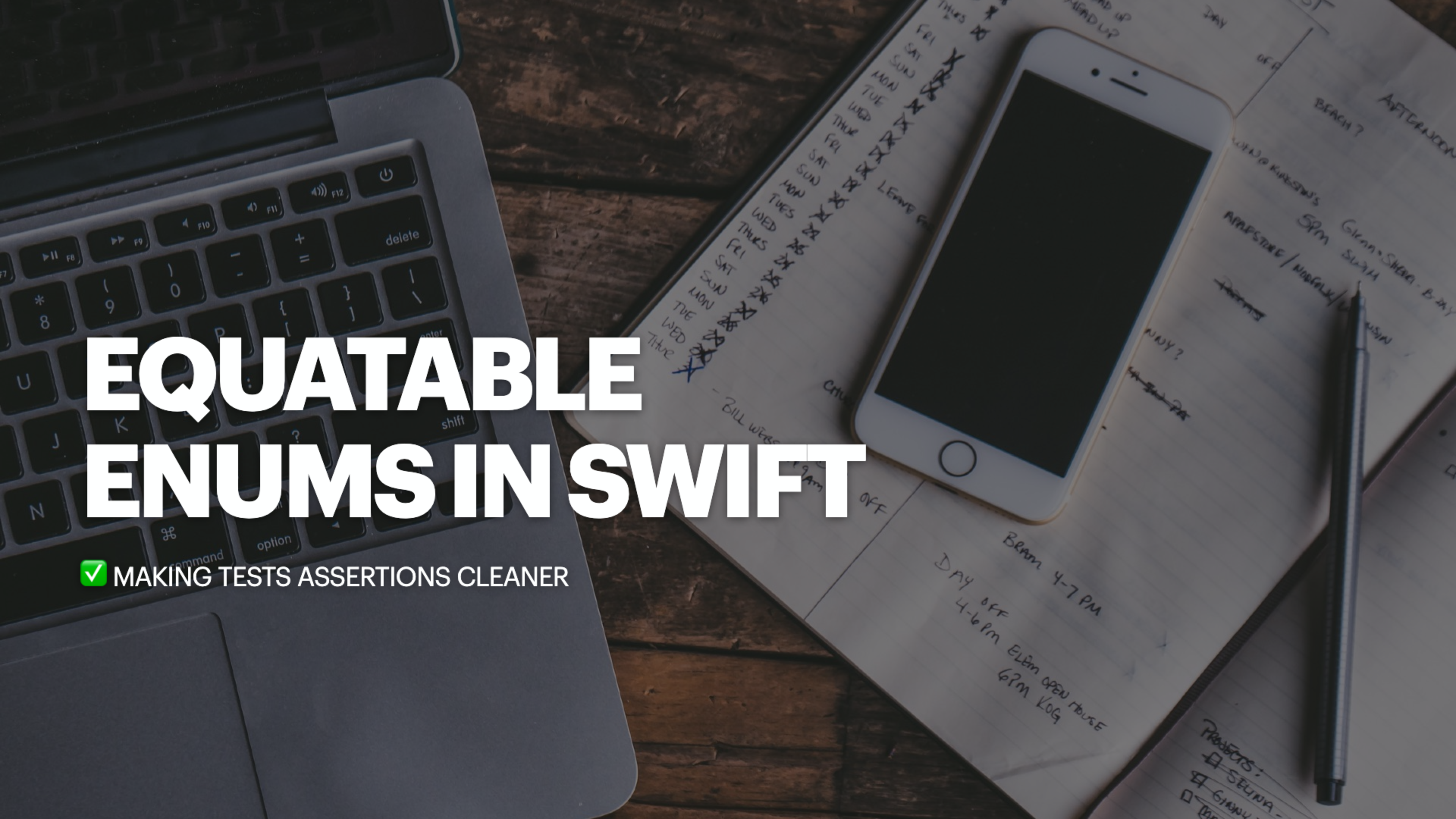 Enumerations is one the Swift's coolest features for its versatility in representing a group of related values. They can become even more versatile and expressive combined with protocols such as Equatable. This short article shows some tricks to do so.

This article assumes that you know what an enum is in Swift. If you are not sure about that, I highly recommend you to read the Swift docs on Enums and this post by John Sundell that will cover all the basics and some more.

Since an enum represents a finite set of options or states, we often want to compare values between enums, and the main way of doing that is using a switch statement like represented below:

Usually, you want to do a specific action for each enum case, that's why a switch statement is so fitting. Only in different cases like testing, you are interested in a single case, so a direct comparison would be better.

Things can become a little tricky when the enum has an associated value.

Now if you try to do a similar test, like the one above, with this enum you'll get the error Global function 'XCTAssertEqual(_:_:_:file:line:)' requires that 'FeedbackAction' conform to 'Equatable'. So the obvious way of fixing this test would be to assert inside a switch statement.

Using the switch statement allowed us to assert that the type and all the associated values are matching the expected, at the cost of having to add the XCTFail at the default case as otherwise, the test would pass even without executing the assertions. Remember that a test success is the absence of failures, so a test without asserts is still a success. But what would this test look like if we were to assert the retryConnection case?

Since the case retryConnection has no associated values, we don't have any assertions to do in the switch statement, so the test would pass by not asserting anything, or fail by the XCTFail on the default case. Besides looking weird, this test isn't clearly following the Arrange, Act, Assert (AAA) pattern since there is no assert.

If you are not sure what this AAA thing is, this article from Mark Seemann briefly explains it, and gives good examples on how to write tests using this pattern. The AAA pattern is a basic standard for testing in many languages, so it is worth the effort to learn and practice it.

A cleaner way of doing the same test would be to make FeedbackAction conform to Equatable.

By default when an enum is conforming to equatable, two values are considered equal if they are the same case and if all the associated values are equal.

So if your enum has associated values only from primitive types or types that have a built-in implementation of Equatable, you can just make the enum conform to the protocol and it will work like magic. Conversely, on a non-trivial custom type, you may have to implement Equatable conformance on this type, or give up and use the switch strategy.